‘Shakespeare Gardens’ are themed gardens that cultivate plants mentioned in the works of William Shakespeare. Particularly common in the United States, Shakespeare Gardens began to be developed there in 1916, with the first representatives in Illinois, Cleveland and Central Park. Dunedin Botanic Garden in New Zealand, however, has a Shakespeare Garden that pre-dates these by several years.

Dunedin’s Shakespeare Garden, in the Dunedin Botanic Garden, was first mooted in October 1913, by the Dunedin Shakespeare Club. The idea originated with Mrs. Christian Colquhoun, “an earnest student of the dramatist”, who, during a trip to England, visited the various gardens associated with Shakespeare, and suggested that a garden should be established on the lines of one at Stratford-on-Avon. It was noted that: “One of the most attractive sights at Shakespeare’s birthplace at Stratford was a garden devoted entirely to flowers mentioned in the poet’s works… Shakespeare was a great lover of flowers, and his plays were full of references to them.”

The Club approached the City Council, who offered £25 towards the cost, and referred them to Mr David Tannock, curator of the Botanical Gardens, who immediately adopted the idea. Tannock studied the works of Shakespeare, finding mention of 114 plants in his works, which were listed in several newspapers:

By March 1914, the first preparations were being made by Tannock; around half an acre was set aside near Opoho Road, and he procured seeds and plants of all of the above species. The Shakespeare Society took advantage of a visit to Dunedin by the famous English Shakespearian actress, Ellen Terry, who was on a tour through Australia and New Zealand, by inviting her to plant a tree.

In June, two to three hundred people assembled to witness the planting of an already well-grown mulberry tree by Terry, with the assistance of Tannock. Terry also addressed the gathering. Other trees planted on the day were an oak, by Mayor Jon Bradley Shacklock, a silver birch by Mr T.W. Whitson, the President of the Dunedin Shakespeare Club, while Mrs Colquhoun planted an aspen. Not everything on the day went to plan, however, with a rustic bridge collapsing, upon which 15 or 20 people were standing, who fell into the bed of the creek, which was thankfully dry. 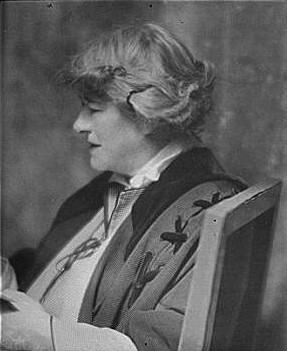 It was reported two months later that “excellent progress” had been made on the garden, and in September, that “Ellen Terry’s mulberry is burgeoning”.

Little was reported on the garden in the newspapers again until 1925, when “a fairly large branch was lopped off the historic mulberry”. Looking back, Tannock remembered that Miss Terry had “laughingly remarked” on the day of the planting that “some day she might have a box made out of its wood”. Though it was thought that Terry would have long forgotten the remark, Tannock had kept it in mind ever since. Thus, from the ‘large branch’, Tannock had a box constructed and forward it to Terry in fulfilment of her wish.

Modifications to the Shakespeare Garden were undertaken in 1926, when the “large and handsome fountain that Mr Wolf Harris [a successful Dunedin businessmen] gave to Dunedin [in 1890], which was shifted from the Queen’s Gardens to Logan Park for the Exhibition”, was moved to the lawn of the Shakespeare Garden.

Criticism of the garden came in 1932 from Edith Hodgkinson, in a piece in the Otago Daily Times, who believed that following the newsworthy beginnings of the garden, the enthusiasm of its founders had waned. The author noted that when they had “sought out the garden two or three years after it had been established it contained only some trees and discouraged looking herbs with identifying labels affixed”.

Perhaps in response to this criticism, in 1933 Tannock again made news with a revised aim, to develop the garden to make it a replica of the Shakespeare Garden at Stratford-on-Avon, but with combined elements of other Shakespeare gardens, including the garden of the cottage where Ann Hathaway, Shakespeare’s wife, lived as a child. The mulberry tree planted by Terry in 1914 was now noted to be “nearly 12 ft high, vigorous, and full of fruit buds”. It was at this time that Tannock proposed to shortly construct a knot garden, of Box (Buxus sempervirens) that, along with the formation of new paths, were put down in 1934; the knot garden is still a feature of the Dunedin Botanic Garden today.

View all posts by gardenhistoryresearchfoundation